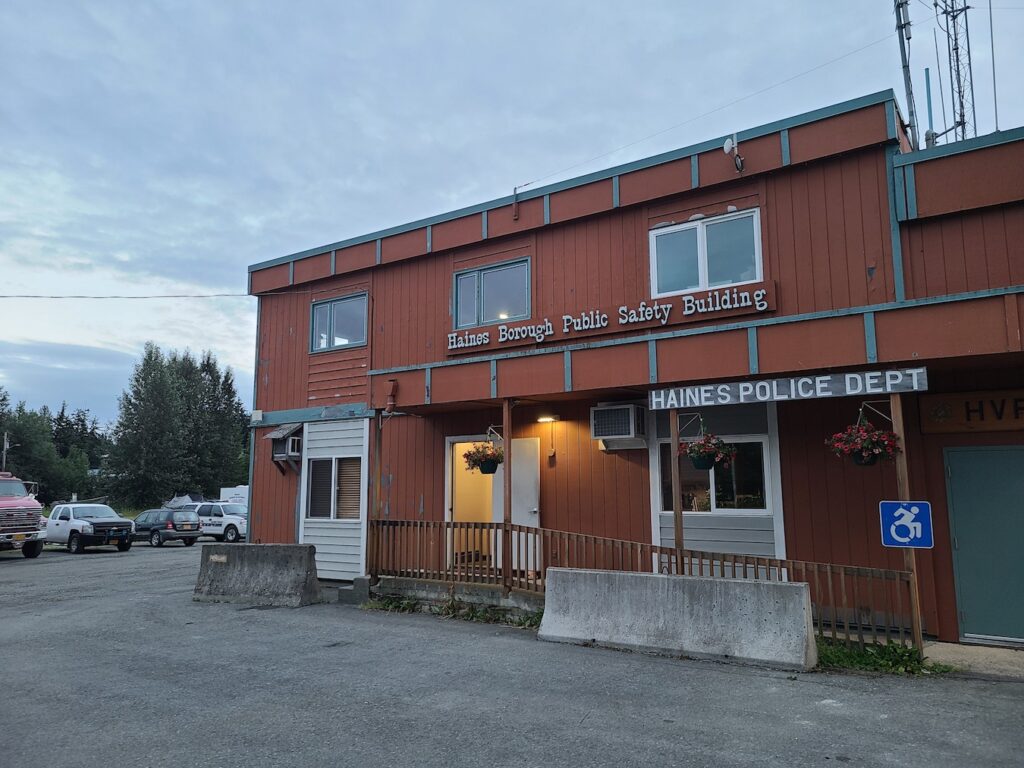 The Haines Police Department says it’s responding to an uptick in bear activity this summer. The Haines Borough requested assistance from state wildlife officials earlier this summer and Haines Police Chief Heath Scott says more public education is needed to keep people from leaving out attractants. KHNS’ Corinne Smith spoke with the police chief  for the latest on bears in Haines, a recent request for money for officers’ overtime and a recent grant for body cameras for Haines police officers.

KHNS: Chief Scott, thanks for joining us. So we’re seeing an uptick and bear activity now here, mid summer. Can you talk about the department’s approach to bear reports?

We’re taking an approach this year where we’re not pushing out everything that comes in because we recognize that we live in a remote Alaska community where we have to share this environment with bears. So we’re trying to push out information that’s relative to the public’s welfare, and safety, addressing barriers that are in close proximity to pedestrian roadways, or pedestrian travel lanes, and areas that are densely populated or when we have an aggressive bear. The numbers that we’re seeing right now, we checked last week, we’re about 20% off our numbers of last year, which is some improvement.

KHNS: What is the bear count now compared to last summer?

Scott: Last Thursday, it was 102 compared to 125 in the previous year.

KHNS: The department and the borough have requested assistance from Fish and Game, what have you asked them for? What kind of assistance can they provide?

Scott: “When it comes to ADF&G, what we’re asking for is really education. And what we’ve

made a few suggestions. And I think they’re rolling those suggestions over. One of the suggestions was getting into the school and teaching young people early. Another suggestion was to continue with mailers and Zoom meetings. But we also want to do some door to door campaigns for environments where we’re seeing heightened bear activity. And then the message to the public is really, and this should come from ADF& G because they’re the experts. But we really want you to keep food out of your vehicles, we’re seeing bears get into vehicles. Because they’re getting into vehicles, we’re asking people to lock their doors, and to secure their residents, so that bears just don’t aren’t able to open doors, you know, throw a deadlock bolt. I know this community loves the fact that it’s a very safe environment. But we do have bear issues.

KHNS:  Is the department ticketing people for bear attractants? Or leaving trash out?

Scott: We have a new ordinance on the books. So if we, if we see a need to provide a citation, it is a correctable offense. And they have one week to do so. And we’re noticing improved behavior… So for instance, if it’s a non secure area where trash is kept, and a bear is able to get into it, the improvement would be to place the trash in a secure area, or to improve the security and area where you keep the trash. And then and then the citation would be pulled back.

KHNS: I wanted to ask you, personally about your your bear incident that you were involved in last year, where you shot a bear last fall. Can you talk about what happened and what you learned from that?

Scott: ​​Well, I don’t know where the inquiry is. So I’m not going to I, I’ve addressed that in

communication with the newspapers and gave my account of it. I am not going to say anything, as long as the (Alaska State) Troopers are still looking at it, which I have not been told that they have made any definitive decisions. So I’m not going to comment any further about.

KHNS: Last year, the department paid significant overtime on bear calls, how does that compare to this year? What’s the department’s outlook in terms of response?

Scott: We’ve had some call outs related to bears in the evening. But, you know, we’re only one month into this year’s fiscal budget. Besides that, I think the the timeframe that we’ve conveyed to our partner agencies that we feel that we need to be most effective in is the latter part of August, September and into October. That’s really going to make or break the community depending on how we address and deal with problems.

KHNS: And the department was awarded an overtime grant for over $73,000 in funding, where did that grant come from? And, does that provide the resources that you need?

Scott: The $73 (thousand), I think was applied to last year. But that is up to the Assembly to dispense that. That grant came from a CESF (Coronavirus Emergency Supplemental Funding) Department of Public Safety grant. We were awarded that towards the end of the fiscal year. So those monies have to be applied where the Assembly would prefer them to be applied. We’re constantly on the outlook for funding and funding support. So another grant that we applied for was a Department of Justice micro grant for body cameras. That grant is specific for small, rural and tribal agencies. We meet that criteria, and we submitted an application, I think, for $40,000 dollars

KHNS: What prompted that?

Scott: I think there’s a benefit and policing, there’s a benefit and transparency, there’s a benefit in adjudicating criminal cases, utilizing that. So we think there’s a significant benefit to the community. And to the work that we do. Our policy is open for public consumption. We can use it, we can use it to address complaint with citizens. It would be a part of the open records request provided the case was the case was complete from an investigative standpoint. So it is it is not unlike any other information that that we would document and then later provide both to the court systems and the public should they want, should they want access to it.”

KHNS: Thank you so much, Chief Scott, for your time.

This website uses cookies to improve your experience while you navigate through the website. Out of these, the cookies that are categorized as necessary are stored on your browser as they are essential for the working of basic functionalities of the website. We also use third-party cookies that help us analyze and understand how you use this website. These cookies will be stored in your browser only with your consent. You also have the option to opt-out of these cookies. But opting out of some of these cookies may affect your browsing experience.
Necessary Always Enabled
Necessary cookies are absolutely essential for the website to function properly. This category only includes cookies that ensures basic functionalities and security features of the website. These cookies do not store any personal information.
Non-necessary
Any cookies that may not be particularly necessary for the website to function and is used specifically to collect user personal data via analytics, ads, other embedded contents are termed as non-necessary cookies. It is mandatory to procure user consent prior to running these cookies on your website.
SAVE & ACCEPT
Skip to content